Has anyone tried one of these LSD’s for an H-190 rear end? 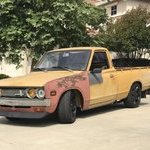 By Drummerboy4as,
September 6, 2022 in Drivetrain