External Oil Filter not circulating/Oil P. Light on and off with RPM 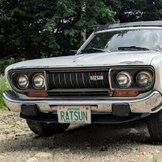